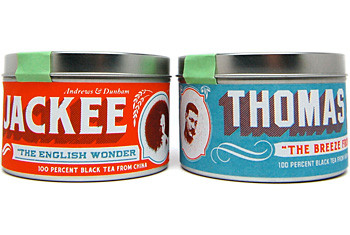 The middleweight dynamo, The English Wonder of West Midlands, has yet to be defeated in a morning bout. While it is known that he prefers to maintain a strict diet of milk and raw honey for up to three days before each contest, it may also be of interest to know that he has startled all manner of audience with his feats of manly engagement. Only last week he delighted onlookers in Wollaston and Great Wyrley with his repeated submersing of both fists in boiling hot water, emerging entirely unscathed and without remark.

Andrews & Dunham insist that you soak an ample quantity of this Keemun black tea from China in boiling water for no fewer than four minutes. Your reward will be a brew both dark and rich with a hint of honey sweetness. Repeating this effort will result in further satisfaction.

Legendary throughout the Northern Circuit, Big Thomas, The Breeze from the Mountain, is twice a champion bare-fisted tree-puncher. He did, in fact, earn his first title before becoming aware that he was involved in a contest, so great is his impatience with obstacles be they festooned in leaf or adorned in hide. Watch as Thomas boils with rage! Marvel at his great brawn! See with your very own eyes that none can withstand more than four minutes of his brutal attention!

Andrews & Dunham recommend that the brewing of this Assam black tea from India be performed by inserting the leaves into freshly boiled water for a duration of exactly four minutes. A strong, malty beverage will then be yours to enjoy in any manner you choose. A hasty preparation will yield a pale and gutless liquor. A more prolonged duration invites bitterness.