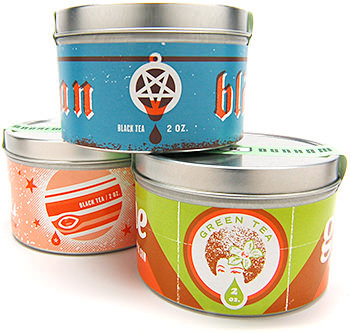 If even half of the stories are true, let it be a testament to the durability of rock musicians that Carävan lasted as long as they did. With a ticket paid in full by the charms of singer and guitarist Ian Black, Carävan rode the mind-numbing rhythms of Phil Steep (bass) and Gryph “Smoke” Upley (drums) down dark highways for four years. Black’s bizarre and tragic death in 1979 put the brakes on this trio’s wild ride. The surviving band members and their music have since been plagued by personal, legal and (by some accounts) supernatural misfortune to such an extent that the survival of their master recordings is a remarkable feat in itself. What remains today is a body of work that reveals a surprising sweetness, albeit richly draped in the fiery brimstone of Carävan’s legendary hard-rocking sound.

Carävan is a smoky blend of black teas. Steep in boiling water for four minutes — more if you can stand it. It is best enjoyed in an 11-ounce mug.

The voice of a lover is like a soft breeze in the night, and for one memorable summer Jasmine Green kept our climate in check through the radios in our cars and the speakers over the dance floor. If you were too young to join the party back then, just take a look at how many baby girls were named Jasmine the following Spring and you’ll get a good idea which way the wind was blowing. She wore a flower in her hair, a platinum smile and a dress that made us all want to dance, but it was her golden voice that made us want to get down and boogie! Jasmine told us not to worry, to forget about the world outside. She kept on doing it until we all gave in.

Jasmine Green is a green tea from China, lovingly scented with jasmine blossoms. Steep in 180 degree water for three minutes and share it with a friend. When finished, heat up some more water and do it again.

Many have worn the crown but few have carried the freak flag of rock to such fantastic heights as Earl Grey. In spite of a seemingly endless procession of heirs and imitators, the Earl’s star shines as brightly today as it did on first rising in the early 1970s. Listeners who might have been baffled by his colorful affectations were instead delighted by the seductive, mysterious character of his songs. Surely his childhood exposure to folk music on a remote Mediterranean island contributed to his fresh sound, as did his travels in India, but his perfect blend of style, creativity and irresistible guitar hooks always seemed like the product of other-worldly origins. Wherever Earl Grey came from, he’s ours now and this true classic continues to surprise and delight us.

Earl Grey is a black tea scented with the oil of bergamot. Steep in boiling water for five minutes and enjoy in whatever manner you please.